How to Get More Active Twitter Followers Using JavaScript

Gaining new followers on Twitter is very important in order to extend audience of our twits. Seemingly the easiest strategy is buying new followers, but this technique is not going to work in terms of long distance perspective. Twitter same as Facebook is daily delivering new algorithms in order to adjust published content to the users’ needs. If the users are not retweeting or giving attention to the content they see, it is the signal for twitter that prepared content is low quality. In consequence of this, our organic reach is shortened…

Some time ago, the different strategy had been presented by Karol (CEO at colibri.io) on his blog, in article “How I get real Twitter followers visiting our site 487% more” I encourage you to read it, because my article is some kind of extension of that text. If you would be having some problems with understanding my article, it is because I already assumed that you have read Karol’ one. If you haven’t done it yet, now is the right time to do it.

I will not go into detail with presenting statistic of its efficiently, I haven’t done complete survey about that yet, which I would consider as reliable and worth presenting. However, at the end of this article, I will share with you some of my thoughts, which might encourage you to combine such an action on your behalf. If so, please give me your feedback.

Karol in his article presented the automatic process of adding new followers. Although he is unfollowing users by using the crowdfireapp.com app, in which you have to click unfollow manually. What’s more free version has a limit – you can only unfollow 100 users.

Alternatively, you can use paid tools like CrowdFire http://www.crowdfireapp.com to perform the similar operation through Twitter API. We use it to unfollow low-quality accounts and users who didn’t follow us back after a certain amount of time.

In my article, I will describe what you have to do in order to automatize both following and unfollowing users and how to bypass limits. I am going to present two apps. First, of them would be, mentioned before, crowdfireapp.com  and the second would be audiense.com (known also as SocialBro) which, in my opinion, gives more capabilities.

The first problem you will meet if you will try the strategy described on Colibri.io is not working “mass follow” script. The article was written over a year ago, so it is not surprising that it is not up to date, since Twitter is constantly upgrading its algorithms. Bellow you will find a version with upgraded code. It should work for some time.

(the original code you will find on github.com: https://github.com/colibritool/Get-followers-on-Twitter/blob/master/follow-people-from-hashtag.js ) I only had to change the part of selecting “follow buttons”.

Add this code while visiting the website where appears list of people you want to follow. In order to do that press F12 on your keyboard. JavaScript console should appear on your screen. If you can’t see it press the menu button (top-right corner – Chrome browser). 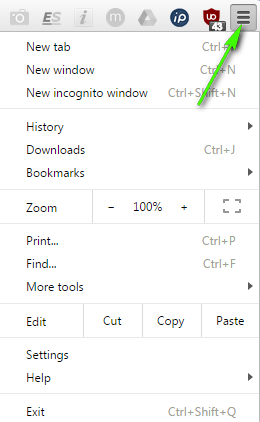 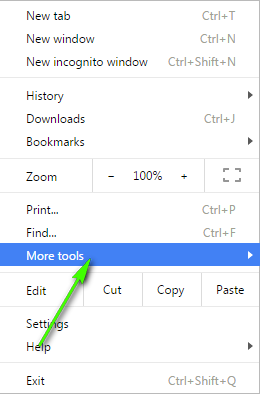 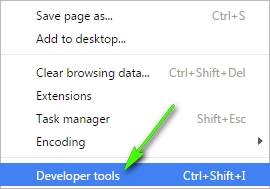 Scroll down the page to the point more people would upload. You can easily check how many people was loaded. You just have to paste following code in the “console” tab.

As a result, you will have your answer.

I recommend adding daily no more than 400/ 440 people, despite the fact Twitter allows to add up to 1000. Later I will explain why this number.

After you started following people (which you expect to follow you back) wait for 24h. If you click follow on somebodies profile, this person would receive alert about that. If you would click “unfollow” such an alert disappears from the profile of that person (at least it is like that when I am writing this text). What does it mean for you? It means that only the most active users will react to your actions. Thanks to that, the community you create, is high quality. I encourage you to experiment with the waiting time in order to find a balance between quality and quantity of followed accounts. You might be needing to shorten the time to 12h or extended it to 48h. I would be glad if you would share later your insights about it.

Unfollowing people who have not followed you back

The next step is unfollowing people, who have not started to follow us. I will present two methods.

Crowdfireapp is really simple-to-use so that you won’t need much time to learn how to use it. In a difference to the next tool, I will show you, Crowdfireapp is very intuitive. The disadvantage I can see is a limit of adding only up to 100 people daily using a free version.

There is also a lack of a useful button, which you can click and automatically delete 100 people. You have to click through it, or…

Or one more time you can use your developer tools. You just have to click on non-followers list, open console and paste the code:

Thanks to that, in just a few seconds, you will reach the daily limit of people that you can unfollow. The main drawback of it is that people you just unfollowed will disappear from your list after some time, not straight away. Due to that, I encourage you to use the second tool, which will give you more options.

Audiense, which previously was called SocialBro is a really complex tool. To get familiar with all provided options you need a couple of long hours. Despite that, I really think it is worth to spend some time to learn how to use that app. One of its functionality is unfollowing people who did not follow you back. To do that, you have to log in and click “My community” tab. 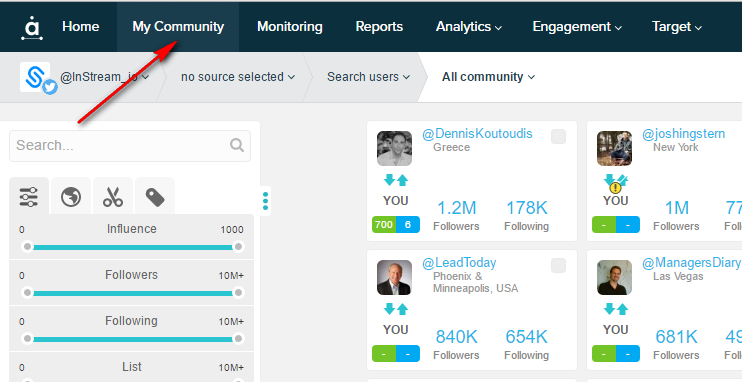 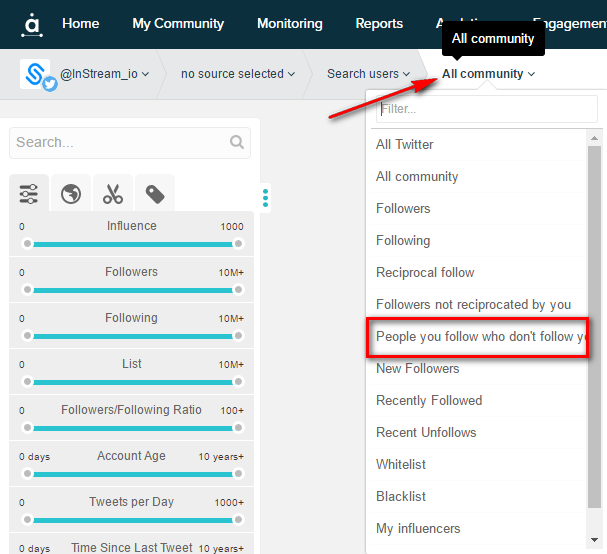 As a result, you will see the list which are not following you. The con is that you would only see a limited number of people there.

It makes no sense to open the script just for a few people and then click next page and do everything from the beginning. It might work for unfollowing 40 people, but when you have to handle 400 it still takes too much time.

I spent over an hour to force Audiense to show me more people on the list. I spotted that, the number of people you see depends on the size of your browser window. If you will decrease the size of the window you will see fewer people, but if you will increase the size you will see more people. I was searching for a way to hack it in JS files, then I was trying to trick Audiense with a plugin to stimulate bigger screen resolution. Again without no results. Surprisingly, the solution was way easier. You only need to zoom out screen by pressing CTRL + scroll down the mouse or CTRL and minus on your keyboard. It makes the website smaller so that Audiense algorithm “thinks” that we have a bigger screen and uploads more people.

Now it will be a piece of a cake. You just need to paste right script, which will do a mass unfollow for you. It is presented below so that now you can feel like real hacker 😉

Now, make the screen smaller, until the point you will see only 40 people. You can make your life easier by hiding the left sidebar.

Now open console and paste the code (from above). After just a few seconds the work is done. You can now log on Twitter and check that the number of people you follow decreased by 40 people. The advantages of that solution are a lack of unfollowing limits and instant results.

Why none of the presented tools let us in an easy way unfollow a lot of people? If such a method would be used by too many users, there would be a high possibility that Twitter will block not only particular accounts but also the access to AIP of those and similar applications. Aggressive strategy if following and unfollowing can result in blocking the account. Quoting Twitter:

Aggressively following and unfollowing accounts is frustrating to other Twitter users and degrades the Twitter experience for everyone.

It is hard to say what Twitter consider as “aggressively”, but I have discovered that after deleting 300 followers in just a few seconds Twitter blocked access to API.

For the moment works well deleting 40 followed people on 1 hour. I haven’t spotted any negative reactions with such a number. It also means that during average work day you can unfollow 40X8 people. If you want to do the process within 24 hours (adding and deleting people) you should daily follow only up to 400 people.

I also encourage you to use an online stopwatch, which will be counting your 60 minutes intervals and will remind you of opening Audiense script. 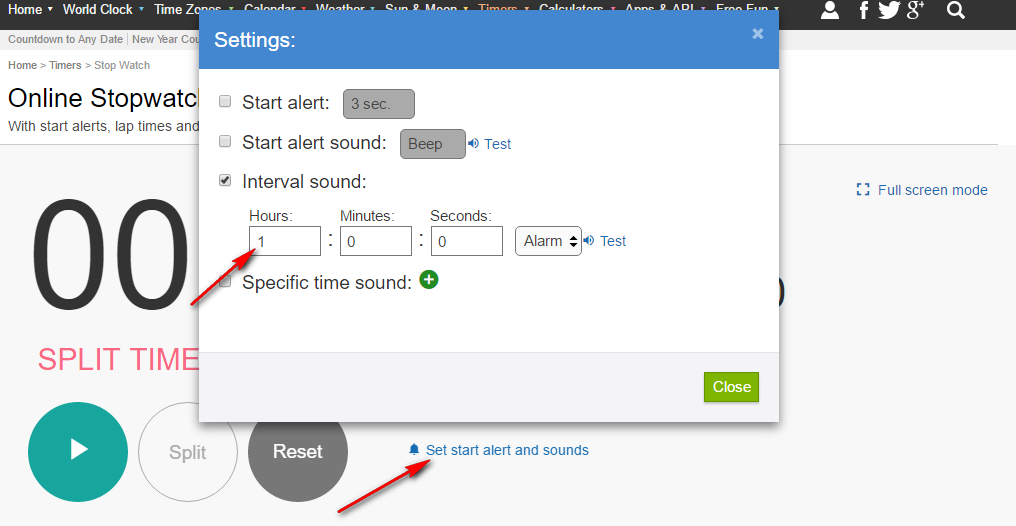 You can Wonder if this technique is efficient in the long term meaning. The perfect solution would be sharing a lot of high-quality content. Such a strategy need a lot of attention and usually determines to hire person responsible only for taking care of this communication channel. In my opinion presented strategy should only support other actions combined on the channel in order to improve your efficiency.

In the Karol article posted on colibri.io about one year ago, he mentioned efficiency score at the level from 20% to 50%. My efficiency score was more likely from 5% up to 15%, what enabled me to gain about 25-50 followers daily. Probably users are not reacting on followed alert now with the same enthusiasm as they did before., but as I said at the beginning I haven’t done reliable A/B tests, so that please consider my number with reserve.

If you liked my article, please let me know about it. You can also sign for our newsletter and check out our website to find why it might be good for you to start using our customer relationship management app.

This website uses cookies to improve your experience. We'll assume you're ok with this, but you can opt-out if you wish.Accept Read More